Apparently this blog about daily life and family has grown to include my cooking adventures...but that's okay because the blog is about me after all, my family, my kids, what we are all doing and for whatever reason we (I) have been cooking lots lately so be it. The other night I was able to make 3 Simply in Season recipes in one dinner! We had barbecued beef (which I made in the slow cooker and it was absolutely aaaamazing!), Parmesan oven fries and roasted cauliflower with Brussels sprouts (and if you think you don't like Brussels sprouts-you have never tried them roasted because they are to die for!)


I have to admit, I have been a bit obsessed with the slow cooker recently. Well perhaps obsessed is a bit strong, but the idea of throwing a few ingredients in the morning, smelling it cook and simmer all day, and at 5 pm getting to actually play with my kids instead of standing over a stove while refereeing whining and requests is pretty wonderful. So I've been looking a lot at this blog called A Year of Slow Cooking. The author dedicated herself to a straight year of slow cooking every single day. So yes, there are over, well over, 365 recipes for a slow cooker on her blog. Since I have recently become the unasked recipient of 30lbs of potatoes (here's how it happened-a 10lb bag at Aldi was cheaper than a 5lb bag-so there was 10, then my organic fruit and veggie co-op-type-thingy sent me about 10 more pounds that same week and a few days later Jewel had a special where if I bought a roast-hence the BBQed beef-I got a free 5lb bag of potatoes...so there you have it, spuds coming out of my ears!), I have been looking for ways to cook and eat these darned things. I found a recipe, if you could call it that, for baked potatoes in the slow cooker. It was very appealing to me because it meant no preheating the oven, no forgetting that dinner was in 45 minutes and I never got the potatoes in, and no using the microwave with crossed fingers as a back up. I have to say the potatoes turned out so fabulous! I seriously will never use my oven for them again. You simply wash your potatoes, dry them thoroughly, prick a few fork holes in them, wrap them in foil and throw them in the slow cooker. No water, no additional ingredients-just potatoes wrapped in foil. Set it for high for 6 hours and when dinner rolls around you have the most tender, juicy yummy potatoes you will ever taste! I had mine with sour cream, cheese and bacon bits. YUM! 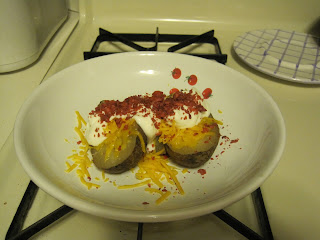 This week I am excited to try her recipe for baked potato soup and right now the J-man (Jamie) has some acorn squash cooking away in the slow cooker to be mashed up tonight for baby food. Hope you are having as much fun this new year as I am with my resolutions!
Posted by Atwood-Family of FIVE at 4:32 PM

Wow! Good for you!

I am SO going to try potatoes in the crockpot and look at the Slow Cooking blog! Thanks!

That is precicesly why I don't cook from scratch alot and when I do cook "homemade" I prefer the slow cooker-time with Andrina. It's not worth losing time with her to be stuck in the kitchen making a meal. Glad to slow cooker is meeting both your needs-to be playing with the kids and to cook-gotta love slow cookers :)